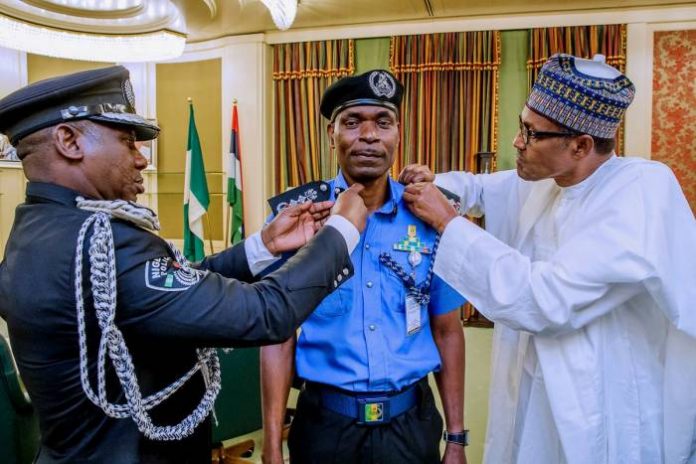 If all goes according to plan, Inspector general of police, Adamu Muhamed will be ending his career with the Nigerian police force today, 1st February 2021.

Today makes it exactly 35 years since the police chief enlisted as a cadet to serve his nation having joined on 1st February 1986.

According to Section 18(8) of the new Police Act, it states that every police officer shall, on recruitment or appointment, serve in the Nigeria Police Force for 35 years or until the age of 60 years, whichever is earlier.

As operations set in for the IGs retirement, some names have been penned down as possible replacements for the police top job.

In as much as the president has the sole aim of appointing whoever he wants for security reasons, there are also a group of Nigerians who are members of the national security council who have one or two inputs as to the selection of the best candidate.

However, according to the law which governs the selection of a police chief, the appointment is made by the president on the expert “advice” of the Police Council.

This Council is headed by the president and has all 36 state governors, Chairman of the Police Service Commission, and the IGP as members.

They are solely responsible for whoever is selected as the new police boss.

However, in terms of seniority, one can always deduce who the next police chiefwillbe.

Naturally, it is normal for the next in command to be given the slot to head the institution but somehow, the president can always have his reasons for choosing another candidate and with the support of the council, his decision mostly stands.

From the next in line which is the deputy inspector generals of police, there are 3 of them who have the most time left before they retire as they will be staying till 2023.

They will all leave the service in 2023.

Dan Mallam Mohammed was born in Katsina in 1963, and will be due for retirement on December 18, 2023; the other two, Lemu and Baba will also leave the service in January and March of the same year, respectively.

The next high ranked police officers in line for the coveted office are three members of the 1990 ASP Cadet Course who are all AIGs now.

They all have four years more to spend in the force as they all enlisted in the Police Force the same day in March 1990 thus making their retirement year set to 2025.

First, on the list, Dasuki Galadanchi was formally the Imo State police chief after which he was redeployed to head Police Cooperative Society in Lagos.

He was also a former deputy commissioner of Police in Ekiti State, among other postings.

At the moment, having been confirmed as AIG, He is now in charge of Force CID Annex, Alagbon Close, Lagos State.

Hafiz Inuwa is currently the Assistant inspector general of police and is stationed in Zone 13, Ukpo-Dunukofia (Awka), Anambra State where he leads the zone.

Inuwa and Galandachi are all from the North-west, which is the same region as President Buhari.

He had served as the pioneer AIG in-charge of Interpol and he is touted to be the officer who was in charge of supervising the extradition of many high-interest suspects to Nigeria.

Previously the police boss in Bauchi and Anambra states, he had also headed the strategic Mopol 19 Unit in Port Harcourt, Rivers State, among other posts.

Apart from the six officers mentioned above, the officer who still has the most number of service years remaining is AIG Moses Ambakina Jitoboh.

He is the AIG in charge of Border Patrol.

Jitoboh was the former police chief in Adamawa State, CP General Investigations at the Force Criminal Intelligence and Investigations Department before he was appointed AIG.

As AIG, he headed Zone 8 Headquarters in Lokoja before he was transferred to Border Patrol.

He is from Bayelsa state and was a former ADC to former President Jonathan.

He may be pushed forward due to the increasing clamor for an IG of southern extraction.

FRSC LAGOS ARREST 110 TRAFFIC VIOLATORS DURING “OPERATION THUNDERSTORM” WITH FOCUS ON MOTORISTS FAILURE TO AFFIX NUMBER PLATES AND OTHER OFFENCES.

Sunday Igboho In Trouble As Buratai Aligns With Benin Republic